Back to the overview

Bilthoven Biologicals is a relatively young company with a long history…Founded in 2011 as a first step in the privatization of the vaccine producing division of the Dutch Vaccine Institute (NVI), the purpose was to sell the company as the Dutch Government wanted to sell the loss making operation. Of course, the origin of the organization goes back more than 100 years to 1909.

After the privatization, several interested parties were interested in Bilthoven Biologicals; however, it was Serum Institute of India that purchased the company. Since Serum Institute of India acquired Bilthoven Biologicals, the situation changed substantially. The once small vaccine production unit for the Dutch market was now part of the largest vaccine producing company in the world. The goal was clear and the focus changed quickly from the Netherlands to the World. In the years that followed Bilthoven Biologicals worked hard on increasing the production of the much needed polio vaccines.

Key organizations such as Rotary International, the World Health Organization, UNICEF, GAVI and others the world declared that after the successful eradication of smallpox, polio was the next disease to be eradicated. While since the initiation of the program the prevalence of the disease has been brought back by more than 99%, the last push to eradicate the disease has proven much more difficult than expected. 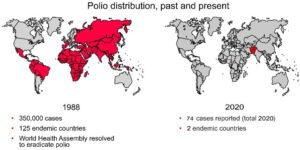 Scource: get polio out

Since the (re-)start, Bilthoven Biologicals has focused on increasing the production of its Inactivated Poliomyelitis Vaccine (IPV) in an effort to make the supply reach the levels of the global demand for IPV. Over the 8 years between 2012 and 2020 Bilthoven Biologicals was able to increase its annual IPV production capacity by ten times from the same facility! On top of that, new facilities have been built to ensure even more product can be produced in accordance with the strict new regulations. This is a clear sign that Bilthoven Biologicals is in the polio eradication effort until the end.

Until recent Bilthoven Biologicals was one of two producers of IPV to UNICEF and the only company to focus exclusively on providing the much needed IPV doses to the developing world!

Over the past years we have provided more than 150 Million doses of IPV to 129 countries in the developing world across 6 continents!  This is how a small Dutch company from Bilthoven can have a significant impact on the health and wellbeing of millions and millions of people around the entire world.

This is what we do…

Bilthoven IPV supply up until 2020 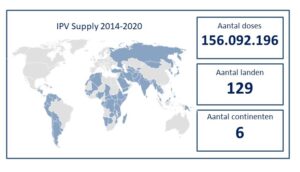 This sense of purpose is what truly defines Bilthoven Biologicals. We do what we promise: we make vaccines for a better world. We do this together with our partners. For everybody. Worldwide. That is what we do best!